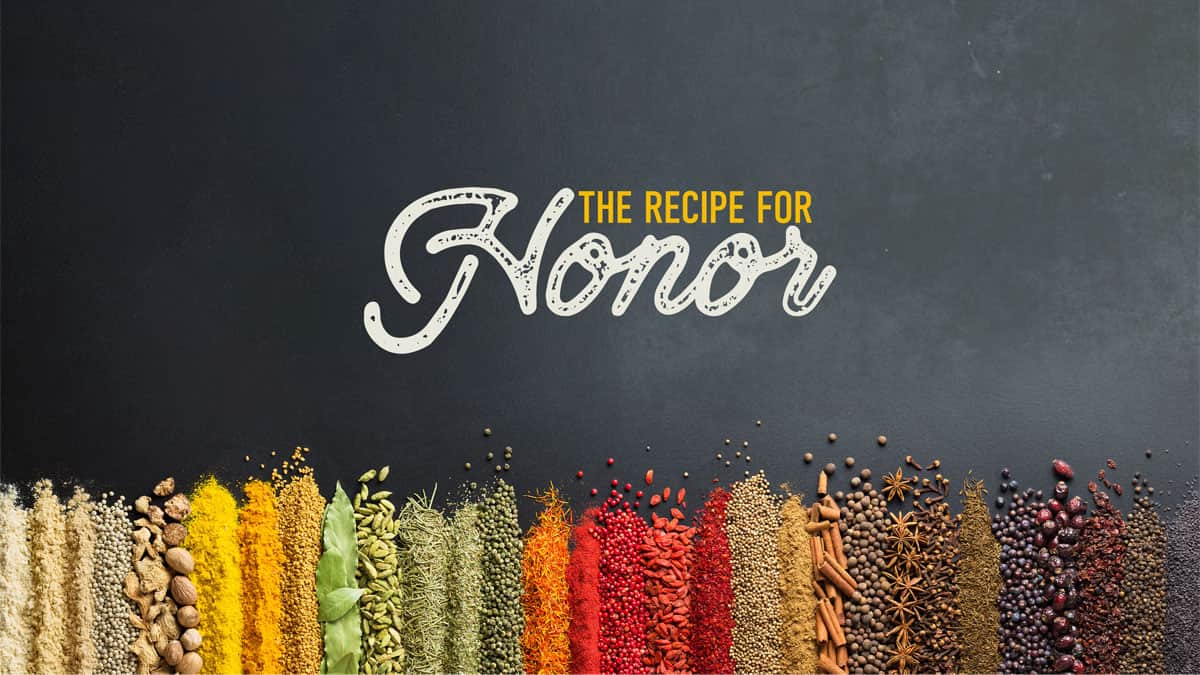 The Recipe For Honor

The Recipe For Honor - Part One

Matthew 13:53-58 (NLT)
When Jesus had finished telling these stories and illustrations, he left that part of the country. 54 He returned to Nazareth, his hometown. When he taught there in the synagogue, everyone was amazed and said, “Where does he get this wisdom and the power to do miracles?” 55 Then they scoffed, “He’s just the carpenter’s son, and we know Mary, his mother, and his brothers—James, Joseph, Simon, and Judas. 56 All his sisters live right here among us. Where did he learn all these things?” 57 And they were deeply offended and refused to believe in him. Then Jesus told them, “A prophet is honored everywhere except in his own hometown and among his own family.” 58 And so he did only a few miracles there because of their unbelief.

Romans 13:7 (NIV)
Give to everyone what you owe them: If you owe taxes, pay taxes; if revenue, then revenue; if respect, then respect; if honor, then honor.

Numbers 12:1-15 (NLT)
While they were at Hazeroth, Miriam and Aaron criticized Moses because he had married a Cushite woman. 2 They said, “Has the Lord spoken only through Moses? Hasn’t he spoken through us, too?” But the Lord heard them. 3 (Now Moses was very humble—more humble than any other person on earth.) 4 So immediately the Lord called to Moses, Aaron, and Miriam and said, “Go out to the Tabernacle, all three of you!” So the three of them went to the Tabernacle. 5 Then the Lord descended in the pillar of cloud and stood at the entrance of the Tabernacle. “Aaron and Miriam!” he called, and they stepped forward. 6 And the Lord said to them, “Now listen to what I say: “If there were prophets among you, I, the Lord, would reveal myself in visions. I would speak to them in dreams. 7 But not with my servant Moses. Of all my house, he is the one I trust.
8 I speak to him face to face, clearly, and not in riddles! He sees the Lord as he is. So why were you not afraid to criticize my servant Moses?” 9 The Lord was very angry with them, and he departed. 10 As the cloud moved from above the Tabernacle, there stood Miriam, her skin as white as snow from leprosy. When Aaron saw what had happened to her, 11 he cried out to Moses, “Oh, my master! Please don’t punish us for this sin we have so foolishly committed. 12 Don’t let her be like a stillborn baby, already decayed at birth.” 13 So Moses cried out to the Lord, “O God, I beg you, please heal her!” 14 But the Lord said to Moses, “If her father had done nothing more than spit in her face, wouldn’t she be defiled for seven days? So keep her outside the camp for seven days, and after that she may be accepted back.” 15 So Miriam was kept outside the camp for seven days, and the people waited until she was brought back before they traveled again.

Genesis 9:20-25 (NLT)
After the flood, Noah began to cultivate the ground, and he planted a vineyard. 21 One day he drank some wine he had made, and he became drunk and lay naked inside his tent. 22 Ham, the father of Canaan, saw that his father was naked and went outside and told his brothers. 23 Then Shem and Japheth took a robe, held it over their shoulders, and backed into the tent to cover their father. As they did this, they looked the other way so they would not see him naked. 24 When Noah woke up from his stupor, he learned what Ham, his youngest son, had done. 25 Then he cursed Canaan, the son of Ham: “May Canaan be cursed!
May he be the lowest of servants to his relatives.”

Proverbs 16:9-10 (NIV)
Honor the Lord with your wealth, with the firstfruits of all your crops; 10 then your barns will be filled to overflowing, and your vats will brim over with new wine.

The Recipe For Honor - Part Two

1 Samuel 2:30 (NLT)
I will honor those who honor me, and I will despise those who think lightly of me.

John 14:6 (NIV)
Jesus answered, “I am the way and the truth and the life. No one comes to the Father except through me.

Mark 10:17-22 (NIV)
As Jesus started on his way, a man ran up to him and fell on his knees before him. “Good teacher,” he asked, “what must I do to inherit eternal life?” 18 “Why do you call me good?” Jesus answered. “No one is good—except God alone. 19 You know the commandments: ‘You shall not murder, you shall not commit adultery, you shall not steal, you shall not give false testimony, you shall not defraud, honor your father and mother.’” 20 “Teacher,” he declared, “all these I have kept since I was a boy.” 21 Jesus looked at him and loved him. “One thing you lack,” he said. “Go, sell everything you have and give to the poor, and you will have treasure in heaven. Then come, follow me.” 22 At this the man’s face fell. He went away sad, because he had great wealth.

Exodus 20:3 (NIV)
You shall have no other gods before me.

The Recipe For Honor - Part Three

The Recipe For Honor - Part Four

Matthew 8:5-10 (NIV)
When Jesus had entered Capernaum, a centurion came to him, asking for help.6 “Lord,” he said, “my servant lies at home paralyzed, suffering terribly.” 7 Jesus said to him, “Shall I come and heal him?” 8 The centurion replied, “Lord, I do not deserve to have you come under my roof. But just say the word, and my servant will be healed. 9 For I myself am a man under authority, with soldiers under me. I tell this one, ‘Go,’ and he goes; and that one, ‘Come,’ and he comes. I say to my servant, ‘Do this,’ and he does it.” 10 When Jesus heard this, he was amazed and said to those following him, “Truly I tell you, I have not found anyone in Israel with such great faith.

Romans 13:1-2 (NIV)
Let everyone be subject to the governing authorities, for there is no authority except that which God has established. The authorities that exist have been established by God. 2 Consequently, whoever rebels against the authority is rebelling against what God has instituted, and those who do so will bring judgment on themselves.

Luke 2:52 (NKJV)
And Jesus increased in wisdom and stature, and in favor with God and men.

Luke 2:51 (NKJV)
Then He went down with them and came to Nazareth, and was subject to them, but His mother kept all these things in her heart.

Proverbs 31:25 (NIV)
She is clothed with strength and dignity; she can laugh at the days to come.

Ephesians 6:2-3 (NIV)
“Honor your father and mother”—which is the first commandment with a promise— 3 “so that it may go well with you and that you may enjoy long life on the earth.”