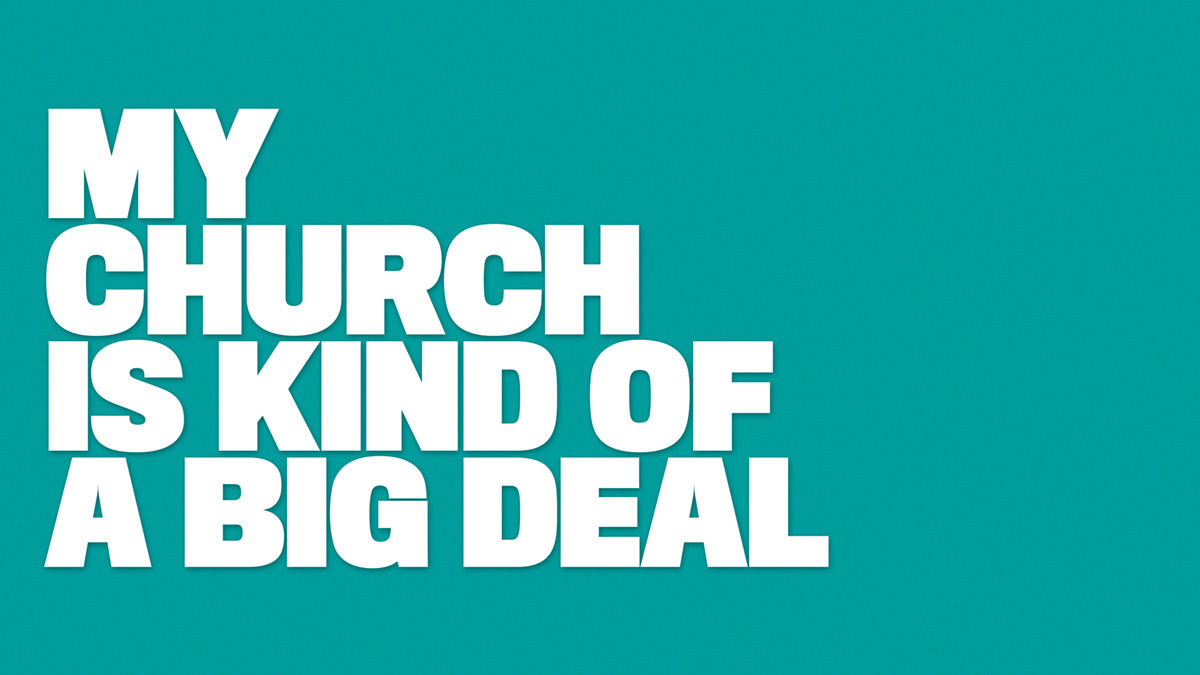 My Church is Kind of a Big Deal

During the month of March we’re celebrating all that God is doing in and through our church during our My Church is Kind of a Big Deal series. We think the best way to celebrate is to give back to our community, and we need you to help us show everyone that Trailhead Church loves and supports our city.

From now until March 14th, we’re collecting donations for our South Graham Elementary School Food Drive. Many of the students at South Graham rely on the food they receive from the school food pantry, and we want to make sure that no student goes hungry during their upcoming Spring Break intersession. You can find out what items we’re collecting or donate financially at trailhead.info. Donations can be dropped off in our big wooden box in front of the cinema during any of our services.

On Saturday, March 17th, we’re getting our hands dirty during a community service day. We want to give back to our city, so we’ll be focusing on service projects in and around Graham. We’d love to assemble as big a crew as possible so we can take on multiple projects around the community. If you’ll be available to lend a hand, head over to trailhead.info and signup today.

Mark your calendars for March 25th as we celebrate our second annual Palm Sunday in the Park. We will be having one special family service at Bill Cook Park at 10:30am. Immediately after service, we will have an Easter Egg Hunt, family church picnic lunch, family kickball game, and, of course, the Zorbs. Bring a side dish or dessert to share and the church will provide hotdogs and drinks. Don’t miss this fun family day as we worship the Lord and fellowship together in the park!

My Church is Kind of a Big Deal - Part One

Luke 13:10-17 (NLT)
One Sabbath day as Jesus was teaching in a synagogue, 11 he saw a woman who had been crippled by an evil spirit. She had been bent double for eighteen years and was unable to stand up straight. 12 When Jesus saw her, he called her over and said, “Dear woman, you are healed of your sickness!” 13 Then he touched her, and instantly she could stand straight. How she praised God! 14 But the leader in charge of the synagogue was indignant that Jesus had healed her on the Sabbath day. “There are six days of the week for working,” he said to the crowd. “Come on those days to be healed, not on the Sabbath.” 15 But the Lord replied, “You hypocrites! Each of you works on the Sabbath day! Don’t you untie your ox or your donkey from its stall on the Sabbath and lead it out for water? 16 This dear woman, a daughter of Abraham, has been held in bondage by Satan for eighteen years. Isn’t it right that she be released, even on the Sabbath?” 17 This shamed his enemies, but all the people rejoiced at the wonderful things he did.

1 John 3:14-16 (NLT)
If we love our brothers and sisters who are believers, it proves that we have passed from death to life. But a person who has no love is still dead. 15 Anyone who hates another brother or sister is really a murderer at heart. And you know that murderers don’t have eternal life within them. 16 We know what real love is because Jesus gave up his life for us. So we also ought to give up our lives for our brothers and sisters.

Luke 14:1-6 (NLT)
One Sabbath day Jesus went to eat dinner in the home of a leader of the Pharisees, and the people were watching him closely. 2 There was a man there whose arms and legs were swollen. 3 Jesus asked the Pharisees and experts in religious law, “Is it permitted in the law to heal people on the Sabbath day, or not?”4 When they refused to answer, Jesus touched the sick man and healed him and sent him away. 5 Then he turned to them and said, “Which of you doesn’t work on the Sabbath? If your son or your cow falls into a pit, don’t you rush to get him out?” 6 Again they could not answer.

Ezra 3:10-11 (NLT)
When the builders completed the foundation of the Lord’s Temple, the priests put on their robes and took their places to blow their trumpets. And the Levites, descendants of Asaph, clashed their cymbals to praise the Lord, just as King David had prescribed. 11 With praise and thanks, they sang this song to the Lord: “He is so good! His faithful love for Israel endures forever!” Then all the people gave a great shout, praising the Lord because the foundation of the Lord’s Temple had been laid.

My Church is Kind of a Big Deal - Part Two

Matthew 13:44 (NLT)
“The Kingdom of Heaven is like a treasure that a man discovered hidden in a field. In his excitement, he hid it again and sold everything he owned to get enough money to buy the field.

John 17:11 (NLT)
Now I am departing from the world; they are staying in this world, but I am coming to you. Holy Father, you have given me your name; now protect them by the power of your name so that they will be united just as we are.

Hebrews 4:14-16 (NIV)
Therefore, since we have a great high priest who has ascended into heaven, Jesus the Son of God, let us hold firmly to the faith we profess. 15 For we do not have a high priest who is unable to empathize with our weaknesses, but we have one who has been tempted in every way, just as we are—yet he did not sin. 16 Let us then approach God’s throne of grace with confidence, so that we may receive mercy and find grace to help us in our time of need.

My Church is Kind of a Big Deal - Part Three

Isaiah 58:1-14 (NLT)
Shout with the voice of a trumpet blast. Shout aloud! Don’t be timid. Tell my people Israel of their sins! 2 Yet they act so pious! They come to the Temple every day and seem delighted to learn all about me. They act like a righteous nation that would never abandon the laws of its God.
They ask me to take action on their behalf, pretending they want to be near me. 3 ‘We have fasted before you!’ they say. ‘Why aren’t you impressed? We have been very hard on ourselves, and you don’t even notice it!’ “I will tell you why!” I respond. “It’s because you are fasting to please yourselves. Even while you fast, you keep oppressing your workers. 4 What good is fasting when you keep on fighting and quarreling? This kind of fasting will never get you anywhere with me. 5 You humble yourselves by going through the motions of penance, bowing your heads like reeds bending in the wind. You dress in burlap and cover yourselves with ashes. Is this what you call fasting? Do you really think this will please the Lord? 6 “No, this is the kind of fasting I want: Free those who are wrongly imprisoned; lighten the burden of those who work for you. Let the oppressed go free, and remove the chains that bind people.7 Share your food with the hungry, and give shelter to the homeless. Give clothes to those who need them, and do not hide from relatives who need your help. 8 “Then your salvation will come like the dawn, and your wounds will quickly heal. Your godliness will lead you forward, and the glory of the Lord will protect you from behind. 9 Then when you call, the Lord will answer. ‘Yes, I am here,’ he will quickly reply. “Remove the heavy yoke of oppression. Stop pointing your finger and spreading vicious rumors! 10 Feed the hungry, and help those in trouble. Then your light will shine out from the darkness, and the darkness around you will be as bright as noon. 11 The Lord will guide you continually, giving you water when you are dry and restoring your strength. You will be like a well-watered garden, like an ever-flowing spring. 12 Some of you will rebuild the deserted ruins of your cities. Then you will be known as a rebuilder of walls and a restorer of homes. 13 “Keep the Sabbath day holy. Don’t pursue your own interests on that day, but enjoy the Sabbath and speak of it with delight as the Lord’s holy day. Honor the Sabbath in everything you do on that day, and don’t follow your own desires or talk idly. 14 Then the Lord will be your delight. I will give you great honor and satisfy you with the inheritance I promised to your ancestor Jacob. I, the Lord, have spoken!”

Luke 14:15-24 (NLT)
Hearing this, a man sitting at the table with Jesus exclaimed, “What a blessing it will be to attend a banquet in the Kingdom of God!” 16 Jesus replied with this story: “A man prepared a great feast and sent out many invitations. 17 When the banquet was ready, he sent his servant to tell the guests, ‘Come, the banquet is ready.’ 18 But they all began making excuses. One said, ‘I have just bought a field and must inspect it. Please excuse me.’ 19 Another said, ‘I have just bought five pairs of oxen, and I want to try them out. Please excuse me.’20 Another said, ‘I just got married, so I can’t come.’ 21 “The servant returned and told his master what they had said. His master was furious and said, ‘Go quickly into the streets and alleys of the town and invite the poor, the crippled, the blind, and the lame.’ 22 After the servant had done this, he reported, ‘There is still room for more.’ 23 So his master said, ‘Go out into the country lanes and behind the hedges and urge anyone you find to come, so that the house will be full. 24 For none of those I first invited will get even the smallest taste of my banquet.’”

1 Timothy 2:1-6 (NLT)
I urge you, first of all, to pray for all people. Ask God to help them; intercede on their behalf, and give thanks for them. 2 Pray this way for kings and all who are in authority so that we can live peaceful and quiet lives marked by godliness and dignity. 3 This is good and pleases God our Savior, 4 who wants everyone to be saved and to understand the truth. 5 For, There is one God and one Mediator who can reconcile God and humanity—the man Christ Jesus. 6 He gave his life to purchase freedom for everyone. This is the message God gave to the world at just the right time.